Come and get a feel of the March Shows of the Hamina Tattoo in the Mini-Tattoo arranged at the Senate Square in Helsinki! 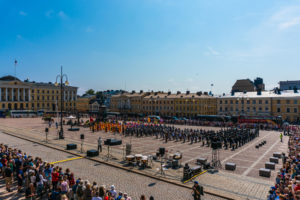 The first Mini-Tattoo was held in Helsinki in 1990, when the City of Helsinki celebrated its 440th anniversary. The public were infatuated by the figure march shows, and since that year the international military music festival of Hamina has brought a little sample of the Tattoo to Helsinki almost every time.