The fortress of Hamina was repaired and renewed extensively under General Alexander Suvorov in the 1790s while at the same time Russia was fortifying its entire border in South-Eastern Finland against Sweden. The new fortresses and repairs of existing fortifications, however, followed the old bastion fortress traditions. 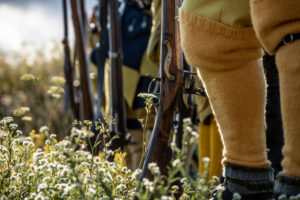 The building of fortifications on the northern side of the fortress of Hamina commenced in 1803 under Engineering General Jan Peter van Suchtelen in accordance with the new caponier system.  A large Central Bastion was built in the middle, with caponiers Puolikuu 1 and 2 (Half Moon 1 and 2) constructed on each side in the moat. The Central Bastion no longer had artillery emplacements, but only a shooting platform and breast wall for riflemen were built for defence purposes. Unlike in the older bastions in Hamina, casemates, in other words vaults built of bricks, were constructed inside the embankment of the Central Bastion. The 240 metre embankment accommodated 58 casemates. The casemates were mainly used for storage. The work was completed in the early 1810s. After the decommissioning of the fortress, wooden stables and storage buildings for the horse-drawn service corps of the garrison were built in the inner yard of almost 1 hectare in the mid-19th century.

After this, the Central Bastion served as a storage area first for the Russian garrison in Hamina and later for the Finnish garrison until the 1970s, when the restoration of the bastion began. The badly collapsed casemates were largely re-built using bricks. This work took 600,000 new bricks. The log foundations of the bastion extending to a depth of 3 metres were reinforced in the same conjunction, and the overlying embankment and breast wall were re-shaped. The restoration work was carried out by the Hamina labour colony working under the Konnunsuo Central Prison.

Present use of Central Bastion

When the plan for the use of the Central Bastion was drawn up at the Architectural Office of the Town of Hamina at the end of the 1980s, it was decided that the historic and unique area should be available to the public.

The idea to convert the Central Bastion into a leisure time centre was based on the utilisation of the cultural history value of the fortress, popularity of the Hamina Tattoo, and further development of tourism. This ingenious idea integrates three issues in an open-minded manner:

– The Central Bastion is a real attraction.

– People have more and more leisure time, and people look for experiences.

– The Central Bastion is located in the centre of the town, and it is easy to arrange the ancillary services.

The idea presented by Hamina of the new use of the Central Bastion matched the goals of the National Board of Antiquities and the Prison Administration. Even though the idea was plausible, the special nature of the project called for creative planning and co-operation before the construction decisions were made in the relevant bodies of the town, the Ministry of Education and the European Union in 1997. Since then the Central Bastion has been presented in various parts of the world as an exemplary project based on history and looking into the future.